The young show classic is a real trademark of the DDC. Under the theme, the crew has already developed numerous different show programs and successfully brought them to stages all over the world.

Thus, after a successful premiere in 2015, the show set to the modern, orchestral version of the Piano Guys' well-known hit "Let it go" goes on a major tour in Germany just one year later with Europe's most successful gymnastics show "Feuerwerk der Turnkunst". In the same year, the show celebrates its TV premiere on ARD in "Das große Fest der Besten - mit Florian Silbereisen". The DDC also performs the Petersburger Schlittenfahrt on the ARD Saturday evening show "Die Adventsshow der 100.000 Lichter". With an abridged version of the show, they will go on the tour "Das große Schlagerfest" with Florian Silbereisen in 2018.  A 40-minute classical show developed especially for the cruise ship MS Europa 2 is another example of the successes the DDC have landed with their "Breakdance meets Classic" creations. A highlight from the combination of breakdance and Mozart, sets the DDC with their show "Breakin` Mozart" which they perform since 2015 throughout Europe. 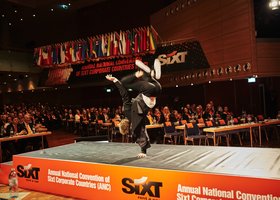 Breakin' Mozart on Tour
since 2013 europe-wide